Fire protection with levers, ropes and steel - Skip to content

On the development of the Iron Curtain

The ingenuity of late nineteenth-century theatre technicians not only created new staging possibilities, but also made theatres and stages safer with countless safety-related inventions. The relevance of safety considerations in the development of new stage technology can be seen in the estate of the Brandt family, directly in individual plans and technical drawings, which illustrate both fundamental safety principles and the smallest detailed solutions. They provide insights into the complexity of stage technology and the challenges that technicians like the Brandts faced in making its dangers and risks controllable and manageable.

These dangers were brought to public attention not least by a momentous fire in Vienna: on 8 December 1881, a fire broke out in the stage area of the Ringtheater shortly before the start of the performance, resulting in the death of almost 400 audience members and staff. Although the Ringtheater fire received a lot of public attention because of its tragic circumstances, it was unfortunately not an isolated case. Smaller and larger theatre fires occurred almost on a weekly basis in the nineteenth century. Open oil and later gas flames used for lighting, combined with the textiles of costumes and scenery, and wood as building material, made visits to the theatre a risky undertaking. Poor ventilation and narrow staircases further added to the risk that fires like the one in Vienna could take on catastrophic proportions.1 This resulted in a lively discussion, both among the public and among experts, about how theatres could be modernised and made safer in the future. Industrialisation, new inventions and scientific findings opened up new technical possibilities that were harnessed for theatres in the late nineteenth century: iron was discovered as a building material for stage equipment, electric lighting replaced the dangerous gas flames and a whole range of technical devices were designed and tested to protect the life and limb of patrons and staff in the event of an emergency. The iron safety curtain became an important component of fire protection and continues to be so to this day. This fireproof barrier was supposed to separate the stage area from the auditorium in the event of a fire and prevent the flames from spreading – or at least allow enough time to evacuate the theatre. Early attempts consisted of not very effective wire nets that were able to stop sparks but not smoke; yet at the end of the nineteenth century, theatres began to use lowerable walls made of corrugated iron. Since the iron safety curtain proved successful, it soon became part of the standard features of theatres, which every theatre technician had to deal with as early as the planning stage. Fire protection also played an important role in the Brandt family’s work and some of the developments of the safety curtain can be traced in the plans and correspondence contained in the collection. 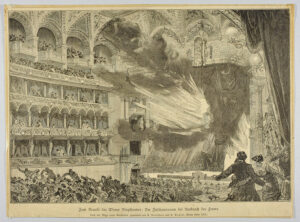 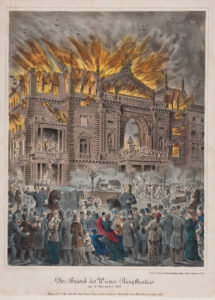 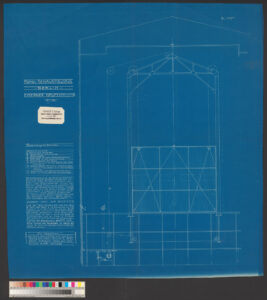 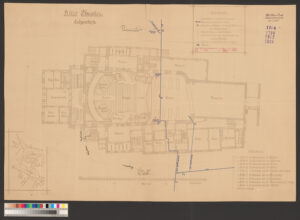 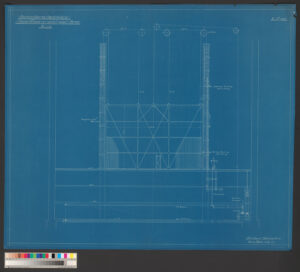 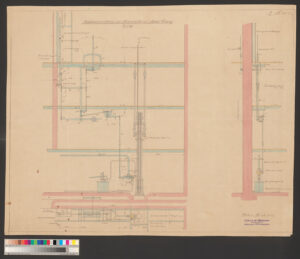 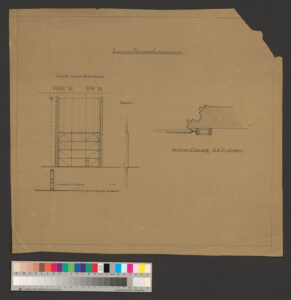 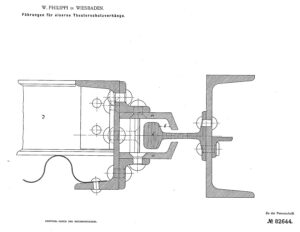 One challenge in the operation of safety curtains, which also played a role in the Ringtheater fire in Vienna, was to ensure that the curtain could actually be lowered in the event of a fire. In the Ringtheater, for example, there was only one hand crank which, moreover, was located in a place that was not easily accessible.2 When the release mechanism of the safety curtain was recognised as a potential weakness, various ideas were tested to make the lowering of the curtain safer. Ludwig Klasen reports an adventurous construction: in the National Theatre in Budapest, the person guarding the safety curtain is said to have been positioned on a balcony, whose exit could only be opened after the curtain had been lowered in the event of a fire, in order to ensure that the worker in charge of the curtain first fulfilled his duty before escaping himself.3 Fortunately, a less dangerous solution proved to be successful. It is illustrated by a plan of the Royal Playhouse in Berlin: the introduction of redundancies (cf. fig. 3).

The safety curtain was designed to be powered by a modern electric engine and equipped with several emergency systems. As a rule, once a lever, which was easily accessible in the stage manager’s box next to the stage, had been operated, the curtain was to be lowered automatically. The proper functioning was additionally ensured by the overweight of the curtain and a rope to pull it down if need be. Should the electric engine fail, the curtain could be disconnected and fall by its own weight. To trigger this emergency mechanism, two levers were planned: the first located centrally on the side of the stage and a second in the staircase, so that the safety curtain could also be released if the stage area was not accessible. This principle was also adopted in other theatres. According to the floor plan of the Altes Theater in Leipzig (fig. 4), for example, three levers for releasing the curtain were in fact planned, on both sides of the stage.

Not only electric motors were used as a substitute for human labour, hydraulics also became increasingly widespread from the 1880s onwards and were used to operate safety curtains. The technical drawings for the German Opera House in Charlottenburg show such a construction. While on the drawing dated 9 November 1911, the control lever could only be operated from outside the proscenium wall (cf. fig. 5a), on the plan dated four months later, the lever can be released from both sides of the wall (cf. fig. 5b).

Even if, due to different structural prerequisites and local requirements, stage equipment and therefore also safety curtains were always custom-made, certain planning principles that seem to have been tried and tested and were adopted for different kinds of stage equipment can be identified in these examples. Such inventions and ideas circulated through specialist publications and personal exchanges, and over time, consolidations and standardisations for widespread problems emerged. A variety of agents was involved in these processes of exchange which concerned even the smallest details, as another example from the estate shows: the lateral guidance of safety curtains. The opera house which opened in Budapest in 1884 was at the time considered the most technically advanced theatre in Europe, with the most modern and, above all, the safest stage equipment the world had seen up to then. In order to ensure that the safety curtain protected the auditorium from toxic smoke, a solution had been developed that consisted of three overlapping metal sheets fitted with rubber lips, which were to form a smoke-tight seal (cf. fig. 6).

A few years later, in 1889, the first regulation for fire protection came into effect in Prussia; it regulated precisely which fire protection measures had to be implemented in theatres henceforth. Sealing off against smoke no longer played a role, but it was stipulated that safety curtains had to withstand a pressure of 90kg/m2.4 As a potential weakness, the lateral guide played such a decisive role in meeting this requirement that the machine manufacturer W. Philippi from Wiesbaden applied for a patent for a special guide in 1894.5 Whereas a movable roller was used in Budapest, the curtain was here guided along a solid iron rail, which was intended to prevent the curtain from slipping out of its guide even under great pressure (cf. fig. 7).

Fig. 7: Drawing of patent specification no. 82644 by W. Philippi, Wiesbaden, patented on 25 September 1894, issued on 12 August 1895. Scan from DEPATISnet, the database of the German Patent and Trade Mark Office.

In his correspondence with Fritz Brandt senior, Philippi, whose machine factory in Wiesbaden was one of the market leaders for stage technology, explained the guidance system. The very same system is thus also found in Brandt’s plans for the theatre in Essen, with reference to Philippi’s patent (cf. fig. 8).

This detail from the estate can serve to illustrate how a bureaucratic police regulation could influence the development of a supposedly small detail of technical planning and finally find its way into concrete plans via a patent and the personal correspondence between Philippi and Brandt. In the decades around the turn of the century, such processes of exchange led not only to fire protection measures, whose basic features are still applied today, but also to developments and standardisations in stage technology, which made theatre visits safer and at the same time substantially changed the workflow behind the stage.