Up to the present day, the historical relationship between theatre, technology and industry has been little studied. The most influential sources are the histories written by theatre technicians and industrial companies themselves; these, however, are rarely consistently situated within their historical context. In addition to these auto-historiographies of stage technology, the extensive collection of plans and drawings in the estate of the Brandt family of theatre technicians can now be investigated in an object-oriented manner as the communicative intersection of theatre (technology) and industry and as the condensation of a knowledge economy of stage technology.

While the stagecraft discourse at the beginning of the twentieth century mainly shows the influence of industrialisation beginning in the 1880s with the advent of large-scale iron stage equipment, sliding stages, revolving stages and podium stages,1 it is worth considering the early relationship between theatre and industry up to the end of the so-called saddle period (1750-1850). For example, the special catalogue of the Berlin Trade Exhibition from 1896 reports that as early as 1804, Berlin’s first machine shop not only produced large metalwork for public buildings, but also the machinery for the royal theatres.2 The founder Caspar Hummel thus linked theatre and mechanical engineering from the beginnings of German industrialisation. Subsequently, other iron foundries and mechanical engineering companies maintained this connection in highly specialised departments. A situational look at the theatre plans and drawings of stage technology preserved in the Brandt estate suggests a few historiographical starting points for this early theatre of industry. 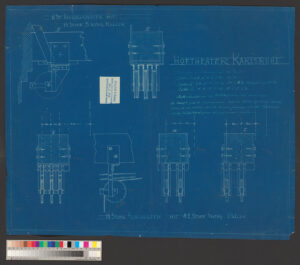 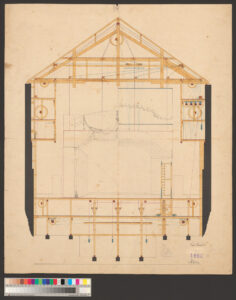 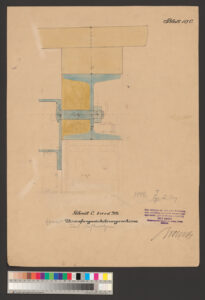 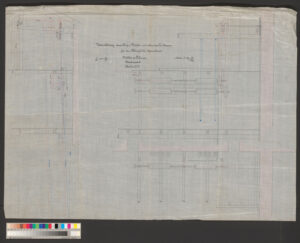 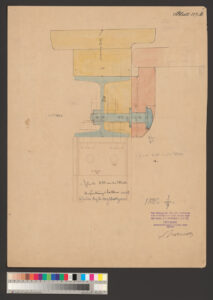 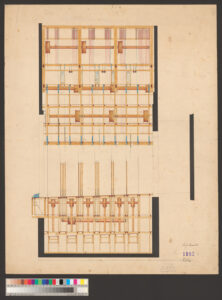 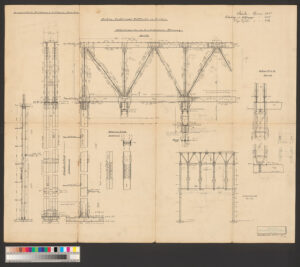 Essentially, the numerous plans and blueprints in the collection can be divided into architectural drawings and detailed technical drawings. The majority of the plans, most of which were created between the Vormärz (the period leading up to 1848) and the First World War, relate to the furnishing of the empty playhouse, including upper as well as lower stage machinery, mostly shown as floorplans of the stage, and in cross-sections and longitudinal sections. The drawings, which are to scale and occasionally coloured to signal different building materials, provide information about the material required for the facilities. For example, required lengths of timber or rope that need to be ordered can thus be obtained directly from the plans (cf. fig. 1). In addition, they document the building and the installations for the respective authorities. Carl Brandt’s floor plan, cross-section and longitudinal section for the Altenburg Court Theatre thus bear the stamps of the ducal ministerial finance department from November 1869 (cf. fig. 2), the sections for the Alberttheater in Dresden are signed by the „Directorium des Actienvereins für das Theater zu Neu und Antonstadt Dresden“ (Board of directors of the society of stakeholders of the theatre of Neustadt and Antonstadt Dresden) and dated August 1871, and the sections of the upper and lower stage machinery of the Düsseldorf City Theatre were initialled as contract documents on 13 July 1875.

For courtly as well as private or civic commissions, stage technology designs were submitted to the responsible entities for approval and for architectural documentation, as is the case today.

To which extent the plans were also kept for internal (family) documentation of projects would have to be investigated systematically and in comparison with other traditions of stage technology drawings. The planning practices for stage technology remain similar for the main corpus of the collection and suggest a standard procedure, at least for the Brandt family: the architect’s office sends plans for the entire building, the machinery is designed to scale in floor plans and sections and submitted to the entities responsible for construction, and finally detailed solutions are presented in individual technical drawings.

In addition to the installation drawings being conventionalised, the rapid development of iron and mechanical engineering is reflected in the technical drawings. The drawings are closely related to standards that were developed and enforced in the sciences of technology and engineering that emerged in the nineteenth century. The „types“ of construction practice proposed by Wolfgang König offer pertinent points of comparison for stage technology and will be recapitulated here as one situational approach to the collection.3 Essentially, for König the typology is determined by the relationship between construction and manufacturing, the corresponding means of communication between them, the auxiliary resources of construction – drawing tools, books, standards etc. – as well as by education and professional experience.4 Within a German construction culture of stage technology, the early designs of Carl and his brother Fritz Brandt can be situated on the threshold between „master’s design“ and „inventor’s design“ respectively, and „constructor’s design“. That is, the detailed designs of the Brandt brothers and the manufacturing companies, always lagging behind the development of mechanical engineering by a few years, were codified mostly in scale drawings until the 1880s, which indicate a little formalised cooperation between the designing machinery director and the manufacturing master that is historically difficult to determine; or they initially permitted a varying degree of freedom for the design of technical products in the production of stage machinery. The machines were custom-made and designed by the machinist, and the construction design was completed in the manufacturing process. Often, sketches were made in pencil; pen and ink was used to draw a fair copy, and the relevant materials were colour-coded; however, no clear standardised procedure can be discerned. Examples are only roughly dimensioned drawings, such as for a „mechanism for winding up and down the scenery of the Royal Opera House“ (cf. fig. 3) by the machine factory Möller & Blum. Precisely because the knowledge economy between design and production was not regulated down to the last detail, the inventive-constructive share of industrial companies in the development of theatre machinery could be assessed as relatively high.

Fig. 3: Mechanism for winding up and down the scenery at the Royal Opera House in Berlin, 1 August 1882. Theaterhistorische Sammlungen, Freie Universität Berlin, call number IfT_FaB_907.

As the manufacturing quality of iron is steadily increasing, so is its use in stage technology. Since components and machines have to be manufactured in specialised factories, detailed drawings develop into the central means of communication between design and production. In contrast to the black and white workshop drawings, a few technical drawings of trapdoors by Fritz Brandt from 1886 are still coloured, but more accurately dimensioned and annotated, providing more detailed information on the sections and marked with a specific letterhead.

The communicative, even mobile function of the drawing is also emphasised by the stamp Fritz Brandt regularly used (cf. figs 4a and 4b); it marks the plans as intellectual property protected by the law. The differentiation of mechanical engineering knowledge is reflected in the technical drawings of the Brandt collection: the technical design, that is, creating and developing, and the construction and production are separated both organisationally and spatially. From the 1890s onwards, the increasing number of blueprints as well as written documents record the growing competence in design of the commissioned companies, which for König falls under the type of highly developed „constructor’s design“. Hillerscheidt & Kasbaum is one of the firms from which finalised, dimensioned and numbered workshop drawings have been preserved, including the number of pieces to be produced (cf. figs 5a and 5b). A plan of the construction company Heilmann und Littmann for lattice girders in the Court Theatre in Weimar, which presents almost every measurement of the iron construction relevant for production, similarly illustrates the differentiated construction knowledge of the industry, materialised in the drawing (cf. fig. 5c.).

Increasingly, the inventor of stage technology appears as an expert commissioner who organises the exchange of orders and products, from theatre-specific equipment to the individual construction of machines within a useful network of production facilities, often near to the theatre or closely linked to his professional connections. His own drawing skills seem to have remained unchanged during this time, but were now used rather for project drawings that simplified the technical solutions for non-expert clients and were appealingly coloured.

According to König’s typology, a new chapter in design culture finally begins with „company design“, which, under the influence of the rationalisation movement, strove for a renewed relationship between design and production from an economic point of view. An example of the influence of this rationality discourse on stage technology are the efforts of Friedrich Kranich, son of Brandt’s student Friedrich Kranich senior, who in 1929, firmly established the paradigm of economic efficiency as a basic formula for stage technology in the first comprehensive handbook of stage technology.5 In accordance with the differentiation presented above, Kranich now understands the industry as an independent knowledge field of executing production.6 After the inventor and the designer, the operating engineer appears on the scene; he begins to distinguish himself during the First World War by his competence in organising workflows and preparing operations.

The change in the knowledge economy documented in the technical drawings had a clear impact on the professional group of leading theatre technicians until around 1900; most of them had used an increasingly consolidated engineering education as an incomplete preliminary training for practical stage operation. An inventor’s knowledge of well-known staging problems and iconic moments, such as specific representations of nature (water, thunder, fire etc.), shipwrecks (The Flying Dutchmen, L’Africaine) or the swimming movements of the Rhine-daughters in Wagner’s Rheingold, could still be integrated into the aesthetic economy of the theatre: a reasonably homogeneous and knowledgeable audience was able to recognise the achievements in technical design and evaluate them according to their effect. By contrast, it seems, the increasing knowledge of construction and operation in the second half of the nineteenth century was more likely circulated as expert knowledge in the emerging professional entities.7 The theatre audience only rarely recognised the technical-logistical systems of the operating engineers, however sophisticated they might have been, as the work of a single person involved in the design of the stage action. Moreover, all organisational authority was now merged in the position of the director, including the aesthetic economy, i.e., the combination and prioritisation of artistic values to be recognised by the audience.

With the transition to standardisation and typification, technical stage knowledge began to be distributed differently between design, construction, production and standards. The historical impact of these technical knowledge economies on the aesthetic economy of the theatre, beyond industrial progressive thinking and ahistorical ingenuity, would profit from further investigation.