City spaces – theatre dreams: unrealised projects in the estate of the Brandt family of theatre technicians

The German-speaking regions of the nineteenth and early twentieth centuries were characterised by the enormous efforts undertaken in the construction and remodelling of theatres. Architects and master builders with extensive expertise as well as highly specialised architectural firms – the most well-known being probably that of Ferdinand Fellner and Hermann Helmer – submitted designs for theatre buildings. Many of these designs were not realised in the end, either because the building projects fell through altogether or because they were contributions to architectural competitions for which another design was chosen. The estate of the Brandt dynasty of theatre technicians sheds light on some of these theatre spaces that remained at project stage, but nevertheless received widespread attention due to their cultural-political and aesthetic significance.

On 14 February 1865, King Ludwig II of Bavaria wrote to Richard Wagner about their joint long-hoped-for theatre plans for Munich: „As far as Semper’s plan for a provisional theatre in the Glaspalast [Glass Palace] is concerned, I am in complete agreement with him; but I am also burning with curiosity to finally lay eyes on Semper’s plan for our festival theatre, which you, my dear friend, and I have both equally longed for, wanting to feel the foretaste of future delights now already!“1 Hans Schliepmann commented on a theatre project for the capital of the German Empire in a richly illustrated publication that appeared in 1913 as a special issue of the periodical Berliner Architekturwelt: „Anticipating the necessity of constructing a new building [for the Royal Opera House] on the old site, the court administration had already acquired the so-called Kroll’s establishment on Königsplatz in 1896 and undertook a reconstruction of the old theatre, and in particular the construction of a large stage area, where performances could take place during the construction work for the new building. When a new building on Opernplatz proved to be unfeasible, all eyes looking for a more suitable building site turned to Kroll’s site, whose occupation by a building equal in monumentality to the Reichstag had long been an urban-planning wish for all art lovers.“2 King Ludwig’s letter and Schliepmann’s explanations on architectural and urban planning revolve around four very different theatre buildings and the special event that brings together performers and spectators/listeners: the incorporation of a theatre into the Glaspalast in Munich, which opened in 1854; the project for a festival theatre dedicated to the works of Richard Wagner, also in Munich; the transformation of Kroll’s establishment, which opened in 1844 at the city end of the Tiergarten park in Berlin, as a second venue for the Royal Opera; and a new building for the Royal Opera in Berlin. For the latter, after considering other locations, a site known as Königsplatz since 1864 was finally chosen; it had been dominated by the new Reichstag building since 1894, as a counterpart to the Kroll building in the symmetry of the square. Of these buildings, the theatre in the Glaspalast, the Munich festival theatre and the new building of the Royal Opera in Berlin did not go beyond the planning stage; only the conversion of Kroll’s establishment actually took place. 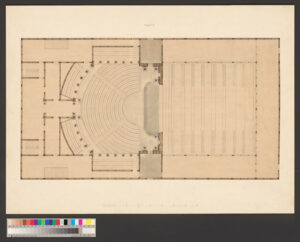 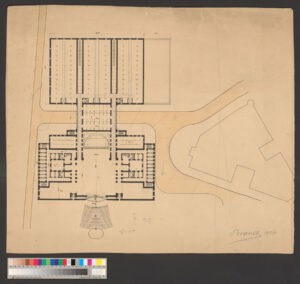 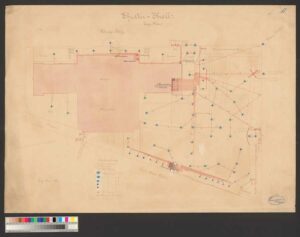 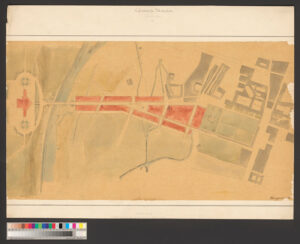 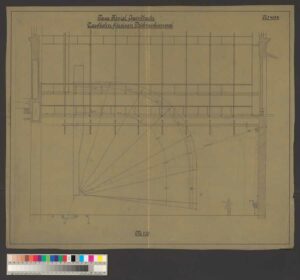 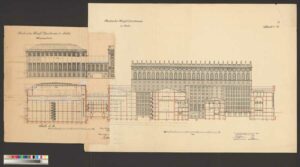 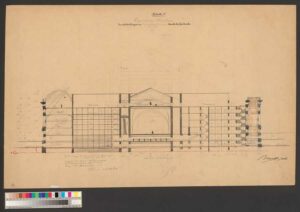 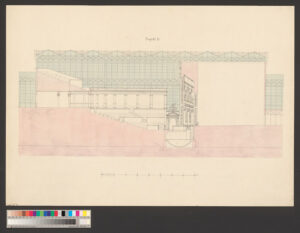 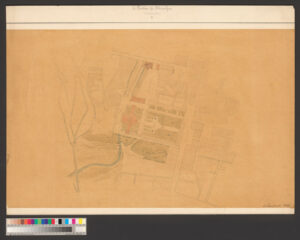 A king’s dreams before Bayreuth: architecture for Wagner’s festival play

In several respects, Carl Brandt and his son Fritz played an important role in the realisation of the festival theatre in Bayreuth and the first performances of Richard Wagner’s Der Ring des Nibelungen and Parsifal. Two structural peculiarities of the festival theatre, the auditorium in amphitheatre form and the lowered orchestra pit – both of which Wagner specified early on as essential to his theatrical concept –, were also constitutive for the plans harboured from 1864 to 1868 for a festival theatre in Munich: commissioned by the Wagner enthusiast and Bavarian king, and recommended by Wagner himself, Gottfried Semper designed a monumental theatre, for which he preferred a location on the fluvial terraces of the Isar.3 In parallel, he designed a provisional theatre to be incorporated into the Glaspalast of the Botanical Garden, which had originally been built as a venue for the first General German Industrial Exhibition. Like the main project, the project for a provisional theatre failed, not least due to political resistance. The holdings of the Brandt estate document, among other things, which variants of the special auditorium shape that Wagner requested Semper presented for the theatre in the Glaspalast.

The materials regarding the festival theatre, which was intended to help the performance of the Ring des Nibelungen reach perfection and increasingly became a site of longing for Ludwig II, visualise not only the architectural-historical relevance of the project but also Semper’s thoughts on the spatial-constitutive function of the building and its potential to demonstrate Ludwig’s importance as ruler and patron of the arts as well as Munich’s significance as royal residence and as city of the arts. In this context, a location on the outbound bank of the Isar seemed ideally suited to Semper (cf. IfT_FaB_043, IfT_FaB_047, IfT_FaB_049), whereas the terrain of the Hofgartenkaserne (barracks on Hofgartenstrasse), which still existed at the time, seemed unfavourable (cf. fig. 2a). The site map of the former illustrate the options associated with the project of a partial restructuring of the St. Anna suburb by means of a new boulevard, which was to end in a bridge and a multi-part ramp and stairways leading to the festival theatre.

From Kroll’s establishment to the new Royal Opera House

Kroll’s establishment with its summer garden is a prominent example for the type of multifunctional building found in many European cities in the nineteenth century, which offered audiences a wide range of possibilities to pass the time. As a matter of course, they combined genres and formats which are commonly separated into the categories of „entertaining“ and „serious“. Over the decades, this also included theatre and opera performances at Kroll’s. After the establishment became the property of the brewery owner Julius Bötzow in 1894, a fundamental reconstruction into a technically and otherwise well-equipped theatre was undertaken, which was subsequently acquired by the crown. – In the Brandt estate, this alteration is made visible by a series of technical drawings which on the one hand allow us to visualise the features of the stage, of the orchestra pit and of the auditorium in the context of the entire complex and on the other hand signal details of the electric installations.

A second selection of materials on Kroll’s establishment concerns the problematic Fortuny system, which was nevertheless game-changing for the history of theatre and of technology: starting in 1906, the project of a lighting system specifically devised for stages and using a dome horizon, designed by Mariano Fortuny and realised largely in cooperation with the A.E.G. and Fritz Brandt, was installed at Kroll’s establishment in several phases and finally used in the summer of 1909 for various opera and ballet productions, including a production of Richard Wagner’s Tristan und Isolde conducted by Felix Mottl.4

The emperor as „builder“: the project for a new Royal Opera House in Berlin

Questions of space, modern safety standards and, not least, the representation of power – these factors led to the project of a new building for the Royal Opera House in Berlin in the early years of the twentieth century. Characteristic of the planning phase, which lasted about ten years and culminated in a series of architectural competitions with very prominent participants, is the fact that the first architect commissioned for designs and the master builder ultimately entrusted with the realisation of the project were both, as it were, direct appointments of the emperor: Felix Genzmer was closely connected to the imperial family through his work on the new Royal Court Theatre in Wiesbaden and the Royal Playhouse in Berlin, while Ludwig Hoffmann was a city building councillor in Berlin and a member of the Prussian Academy of Construction. Genzmer’s first drafts from 1906 still designated the Opernplatz as the location for the new building; Hoffmann’s detailed plans from 1913/14 then referred to the Königsplatz, which had in the meantime been chosen for the purpose.5 While Genzmer also took part in the first of the architectural competitions (1910),6 Hoffmann only agreed to collaborate on the project in 1913 and after repeated requests. – The Brandt estate includes, among other things, a large number of technical drawings on the project status of 1913/14 (main building and storeroom), when the project came to an end on account of the war. Of particular interest is a series of detailed drawings by Fritz Brandt (floor plans, longitudinal and cross sections, some including people to illustrate scale), which are dated 1906 in accordance with Genzmer’s first drafts (which have not been preserved themselves), but which apparently already assumed that Königsplatz and no longer Opernplatz was to be the site of the new opera house (see fig. 5b).

Regardless of the fact that most of them remained unrealised, the four buildings discussed here represent, each in a distinct manner, decisive tendencies in the furnishing and use of theatre spaces in the nineteenth and early twentieth centuries: they show the continuing relevance of sovereigns for the construction and maintenance of theatres in Germany up to the First World War, while at the same time private entrepreneurs on the one hand and municipal authorities on the other emerged as sponsors of theatres. The buildings‘ architecture illustrates how alternative styles and building structures emerged alongside Historicism; these were based on technical innovations, followed functional reform concepts, or responded to the requirements of modern safety standards. In an exemplary manner, the four projects also illustrate the extent to which the construction of theatres was understood as a space-structuring building task in the quickly expanding cities that had been freed of their medieval fortifications.